Vocabulary. Ugh, that word. It makes me think about all the times I was told to copy the words and definitions. It was so boring and my hand always hurt when I was finished. It is well-known that an advanced vocabulary can contribute to higher SAT and ACT college entrance exams, but why are we talking about this now?

I’m ashamed to say, but when I first changed careers to become an English teacher, I thought “I don’t have time to teach vocabulary. Kids will just pick up new words on their own.” And while this is partially true, I came to realize that vocabulary (the words known to an individual person), is of utmost importance. Knowledge of a word’s meaning can often be the key to a child being able to understand the entire sentence, paragraph or entire text. Without it, they are “locked out.” When reading about labor reform in the early 1900’s, if the student has no understanding of the word “union” they will be utterly lost.

Vocabulary: A Predictor of Success

What really changed it all for me, though, was when I was presented with a graph showing the correlation between an individual’s vocabulary knowledge and their career advancement in an industrial setting (thank you, professional development). The more words they knew, the more money they made. I shared this knowledge with my 7th graders and they got it: Vocabulary will make you rich??? What could have been very tedious work became an opportunity to practice new words and play interactive games and ultimately, own them when writing.

“Many research studies show that vocabulary is the best single indicator of intellectual ability and an accurate predictor of success in school.” (Elley, W. B. 1988 New Vocabulary: How do Children Learn New Words).

But what does this have to do with reading to babies? Even though they can’t even talk yet, infants are building their receptive vocabulary (words they can comprehend and respond to, but not actually say). Around 4-6 months, they may understand the meaning of the word “no” by your tone of voice. At 7-9 months, they may recognize their own name, or that the speech sounds you make when you say their name refers to them. Around 10-12 month babies can start to connect words with what they represent (i.e. if you say “Where’s the dog?” he/she may look around for the family pet). This is where reading books to build vocabulary comes in.

“According to a study led by Dr. Carolyn B. Cates, researchers found that the quality and quantity of book reading in early infancy influenced the child’s vocabulary and early reading skills. This influenced their kindergarten readiness – a key predictor of school success.”

In my experience, nine months old is prime time for building receptive vocabulary. This means you can start to focus on helping your child make word-to-picture associations through the use of books. You won’t really know how much is getting in there until your child’s expressive vocabulary (the ability to say or pronounce words) kicks in between 12-24 months, but believe me, it is.

You can help them learn new words by having them view one image at a time and saying its name. The pictures should be clear and realistic photographs of objects, places or animals. That way, when you encounter these objects in daily life, they are easily identifiable. Be on the lookout for these opportunities as this is where you can help your child begin to make connections from what they read in a book to the real world. For example, pointing at a plane in a book and saying its name and later, pointing it out as it flies overhead saying “plane.” It seems so simple, but it is so fundamental to language development and early literacy.

Experts agree that new words are best learned in context (as they are used in a sentence). But those "first words" baby books do help babies focus on one word at a time. The best books for learning vocabulary share a common thread to help babies categorize new words (i.e. food, things that go) and have a single image and one word per page. Also, when it comes to animals, those cartoon versions might be cute, but for a child to recognize them in real life, they need to look like they do in real life. My husband and I gave each other Jimmy Fallon’s MAMA and DADA as sentimental first Mother’s Day and Father’s Day gifts, respectively, but I can barely tell what the horse is supposed to be, so I know my infant can’t. 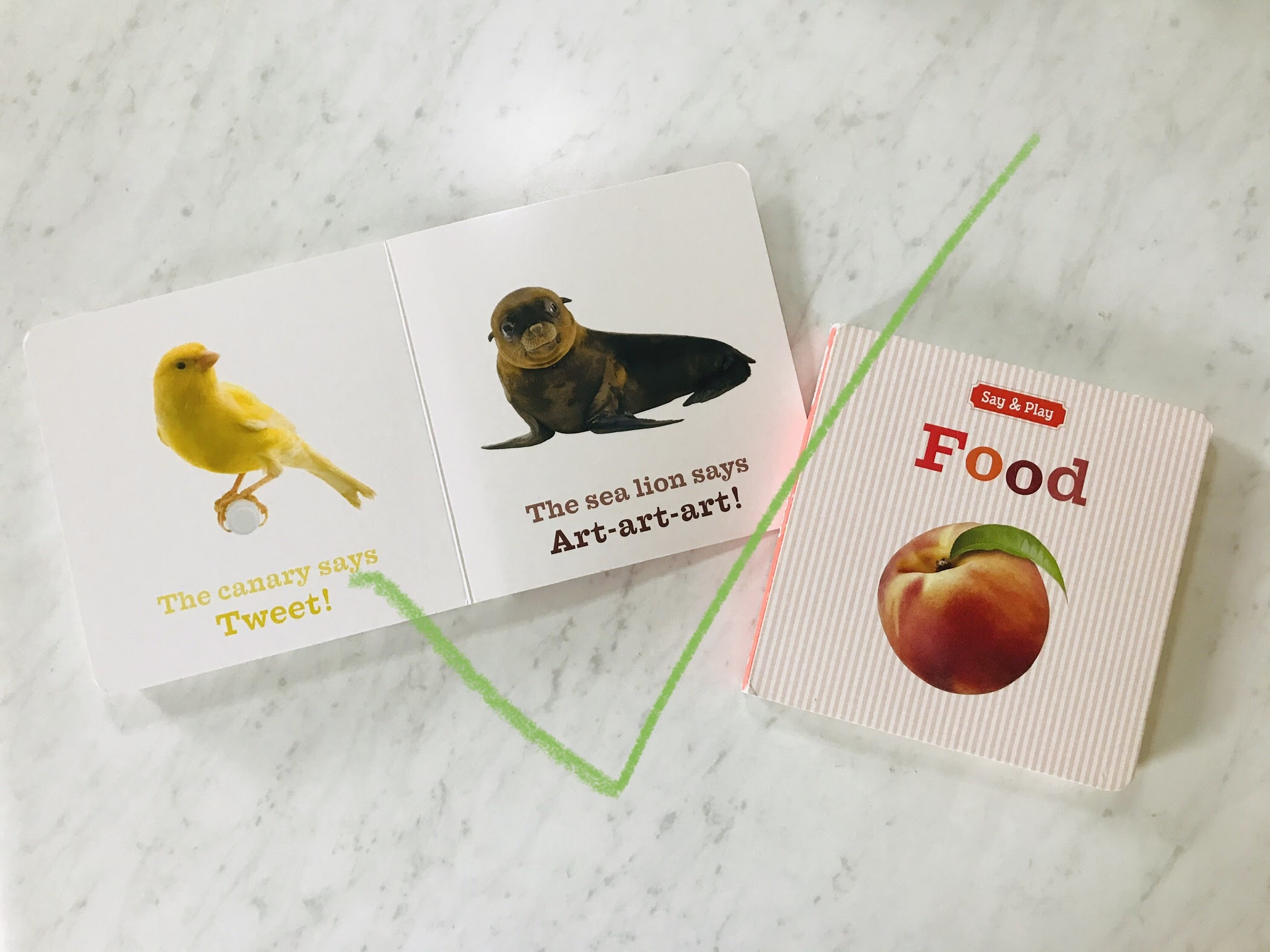 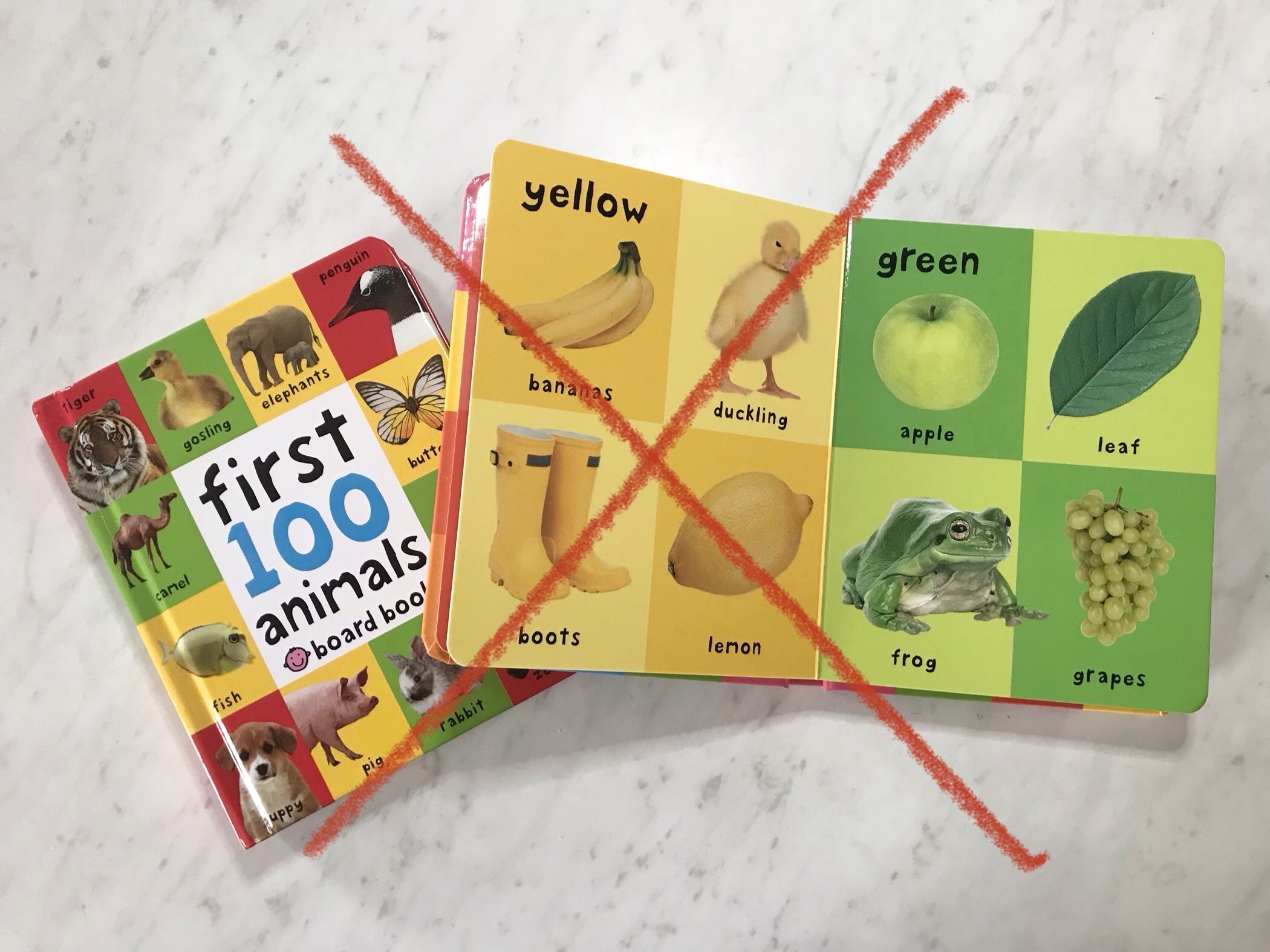 The Say & Play board books are my go-to and they also come in English/Spanish if the bilingual aspect is important to you. I like the high-quality images on a clean white background.

Priddy Books Bright Baby series is a good choice too, but has a colorful background where I would prefer white. Also available in bilingual (Spanish) versions:

Also, the DK Baby Touch & Feel books are great for including sensory elements, they just don't have as many pages:

NOTE: I do not recommend the popular 100 First Words and other books in the series as there are too many images on each page and your baby needs to be able to focus on one at a time. I bought a box set and lived to regret it.

While most books geared to babies and toddlers use age-appropriate vocabulary words, don't be afraid to introduce books that have unfamiliar or more sophisticated words. The beauty of how our brain learns a language is that it can discern the meaning of an unknown word as it is used in context (think Dr. Seuss's nonsensical words). For example, a stanza from The Pout Pout Fish reads: "Hey Mr. Fish, With your daily scaly scowl, I wish you wouldn't greet us With a grimace and a growl." My two-and-a-half-year-old may not know the word "grimace" but it doesn't cause him confusion and the more he encounters the word, he will begin to understand its meaning (this is part of the reason why reading the same books to our child over and over makes them smarter). The jellyfish is talking about Mr. Fish's "scowl" and he is known as the "pout-pout fish," both clues to help the reader. Looking for "clues" to the meaning of an unknown word is a skill we want to develop as they will be expected to do it in school. So, you could be an overachiever and stop and talk about the word or use facial expressions to show a grimace, but then you might never finish the book. Just use some intonation and keep going.

Now it's up to you to bring your best word game to your baby. I know it feels silly to be talking to your baby in the middle of the grocery store pointing out the names of fruits and vegetables, but strangers will probably think it’s adorable. Don’t stop. With my firstborn, I will admit I had moments of frustration. By the time he turned a year, other babies his age were saying more words than he was and while I knew that every baby develops at their own pace, as a teacher, I was impatient to see progress. And then, at 16 months old, all of that receptive vocabulary he’d been accumulating was unleashed. Every day, a new word came out of his mouth and I felt I was repaid 10 fold for my efforts. At 18 months he said his first sentence “Daddy make train go” (referring to the electric train we’d set up around our Christmas tree) and we were over the moon! As my second son approaches nine months old, I am even more excited and determined to help him learn new words, because I've gained a perspective I didn't have the first time around: it's worth it.

As your baby becomes a toddler before your very eyes, their language skills (or lack of) may start to play a part in their behavior. Think about how frustrated you get when someone isn't listening or understanding what you are saying. According to a recent study by Penn State, there may be a relationship between temper tantrums and language abilities.

"Toddlers with more developed language skills are better able to manage frustration and less likely to express anger by the time they’re in preschool... Without the proper words, children can struggle to express emotions and feelings during times of frustration."

So while that college scholarship may benefit you in 18 years, the short-term benefits of building your child's vocabulary will enable the two of you to communicate in healthy ways much, much sooner.

Any links to Amazon are affiliate links for which I receive a small commission. Thank you for supporting my passion project.

See also: Reading to Babies, Interactive Books for Babies and What Makes a Good Children's Book?

The 3 R's - Rhythm, Rhyme and Repetition

Raising Readers: It's Never Too Late to Start